Ho-hum.  That's about all I can say about this 1940's supernatural tale where Dr. Julian Blair becomes obsessed with trying to communicate with his dead wife.  Boris Karloff plays the good doctor and does a solid job with the role.  However, I just couldn't get excited about this one.  There are no surprises and you know where it's headed every step of the way.
The directing is fine, the sets look good, the cinematography is pleasant.  All of this leads me to exclaim "So what?"  Maybe I was having an off night when I watched this but it's just O.K.  There are much better made 1940's horror films and far greater performances by Karloff.  I suggest you try those first.  This one is for Karloff fans only.
RATING: Good.
For more info check out the film's entry in IMDB.
Posted by Zombiefan at 6:00 PM No comments:

Texas Chainsaw Massacre [TCM] is without a doubt one of the most profoundly disturbing films I've ever seen.  It is also incredibly well made, referencing everything from the unrelenting terror of Night of the Living Dead (1968) to Hitchcock's famous shower scene from Psycho (1960). Tobe Hooper accomplishes something remarkable that modern torture porn never achieves: He shows us a portrait of humanity at its most depraved state and yet the film is relatively bloodless.  Yes, people swear they see Leatherface hang that poor girl on a meat hook but look closely...it's not there.  The mind fills in all the details!  Brilliant!  He does this again and again and again.
Like Romero before him, Hooper proves that low budget horror can be scary and disturbing as hell.  He accomplishes this unending sense of dread by creating a world that none of us would wish to inhabit.  The use of bones fashioned into household decorations and a mansion that is falling in on itself sets the stage.  He then fills this stage with four of the most unimaginably depraved individuals to ever grace the silver screen and then lets them play a cat and mouse game with a few unfortunate souls.
I saw a documentary on this movie and the actors who worked on it got plenty of bruises and cuts while making this film.  Hooper wanted realism and they took quite a beating to achieve it.  Hooper also let the actors improvise quite a bit on the set so much of what you see is fresh and raw.  They also filmed TCM in a Texas heat wave under horrible conditions.  This further helped the actors get into character and the results of their work is unforgettable.
I REALLY warn you that this one is not for those with a weak stomach or low tolerance for violence.  There really is no happy ending here.  Yes, there is a "survivor" but it's hard to imagine that she would end up anywhere other than a mental institution for the rest of her life.  TCM  is beautifully disturbing and leaves the audience with images they will never ever forget.  Just try to keep reassuring yourself "This is only a movie.  This is only a movie."
RATING: Excellent.
For more info check out the episode's entry in IMDB.

Posted by Zombiefan at 3:28 PM No comments:

Very few films make me wince.  Zombi 2 is one of them.  Italian director Lucio Fulci gives us a horror masterpiece that's both gory and imaginative.  Trying to cash in on the success of George Romero's Dawn of the Dead [which was entitled Zombi in Italy] the makers of this film simply called it Zombi 2.  In some ways it rests on the shoulders of Romero's shambling, slow-moving, flesh-eating zombies.  But it also goes "old school" and incorporates some of the Haitian voodoo elements so prevalent in early zombie films.  In the end it's really a hybrid of both.

The zombies in Fulci's film are truly works of art.  He once described them as "walking flower pots" which is a great description.  Many of their eyes are closed and the make up is in thick layers so that they look a bit like mummys but far more menacing.  Kudos to Gianetto De Rossi for giving us some of the most visually stunning zombies ever to grace the silver screen.
This movie is true Italian horror with boob shots for no apparent reason and TONS of gore.  Fulci lets it flow with reckless abandon.  So much so that the film originally received an X rating.
The native drums on the soundtrack are a bit irritating.  I found myself wishing they would stop numerous times in the film.  However, the underlying soundtrack is good and sounds a bit like the atmospheric music Goblin did for Dawn of the Dead.
Yes, the acting is not always the greatest and tends to be a bit melodramatic for my tastes.  But no one can deny Fulci's talent and artistry as a director.  Zombi 2 is NOT for the faint of heart but it is one of the most memorable zombie films I've ever seen whose images will remain with me until they put me in the ground.
RATING: Excellent.
For more info check out the episode's entry in IMDB.

Posted by Zombiefan at 2:05 PM No comments:

Dark Night of the Scarecrow (DNOTS) was a made for TV slasher flick in the early 1980's.  Yes, that's what I said.  The plot is strictly by the book.  There are no surprises here.  A "slow boy" named Bubba is murdered by a group of vigilantes who kill him for something his is not guilty of doing.  Then he exacts his revenge from beyond the grave.
DNOTS is greatly aided by the acting talents of veteran character actors Charles Durning and Larry Drake.  It would have been in serious trouble without them.  I just couldn't get too jazzed about this one.  It is nearly bloodless and the suspense level fof the film is a slow burn at best.  It's not a bad film.  It is well made and well acted.  It's just not that exciting.  I'm not sure why it got a 6.8 out of 20 on IMDB.  All I can say about it is ho-hum.
RATING:  Good.
For more info check out the film's entry in IMDB.
Posted by Zombiefan at 6:57 PM No comments: 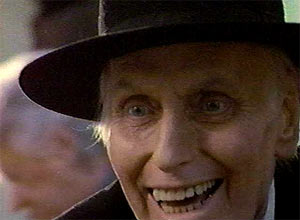 Four years after the original blockbuster comes the sequel Poltergeist 2.  How is it?  Actually, quite good although it doesn't totally measure up to the first film.  [Steven Spielberg's absence is definitely noticed.]  The Freeling family with JoBeth Williams and Craig T. Nelson as the loving parents are back with their tortured kids Carol Anne [Heather O'Rourke] and Robbie [Oliver Robins].  They have moved to a new house but they haven't escaped the entities that are hot on their trial.


The immortal Zelda Rubinstein is back as well as Tangina and there is an added shaman/psychic, Taylor, who is played wonderfully by  Will Sampson.  The addition of Native American spirituality works well here and serves the expanded story line quite effectively.  By far, my favorite addition is the "world's creepiest preacher EVER" played with menace by the skeletal actor Julian Beck.  I don't know where they found him but, WOW, he steals every scene he's in.
The special effects in P2 get a little crazy at times and feel a bit more like a John Carpenter film or something out of Hellraiser.  I don't know if that was necessary but it is awfully fun to look at.  Yet, it also left me with the feeling that sometimes less is more.
Poltergeist 2 has been judged rather harshly by some critics but I disagree.  Yes, the first film is better but P2 is a very enjoyable ride that takes the story from the first and moves it forward in an interesting direction.  Strong acting and eye-popping effects make it a great example of classic 80' horror.  Don't miss it.
RATING: Very Good.
For more info check out the film's entry in IMDB.

Posted by Zombiefan at 2:28 PM No comments: 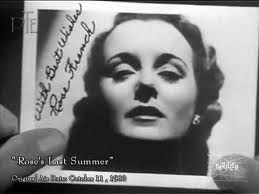 Season 1, Episode 5
A solid entry in the Thriller series.  Mary Astor [The Maltese Falcon] plays Rose French, an aging actress who has been out of work for quite some time and hopes to restart her career.  She is offered a job in California and, several days later, is found dead.  The plot eventually takes a surprising turn which I didn't see coming but after the "twist" is revealed fizzles a bit to a quite predictable ending.  Darn!  This one could have been great but it doesn't quite get there.  Again, it would have been a better film in the 30 minute range rather than 50 minutes.  Still, it was an enjoyable little thriller.
Director Arthur Hiller, who also directed Episodes 1& 2, is definitely in his element with this kind of filmmaking.  He always gets solid performances out of his actors and has a nice sense of pacing of action and drama.
RATING: Good.
For more info check out the episode's entry in IMDB.
Posted by Zombiefan at 1:38 PM No comments: 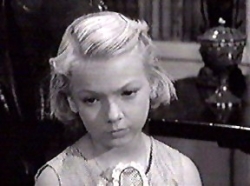 Season 1, Episode 4
Poor little Tessa.  Is she a sociopathic killer or just a girl framed for a murder she didn't commit?  This is the question posed by The Mark of the Hand, capably directed by Paul Henreid [Casablanca, Alfred Hitchcock Presents] from a novel by American mystery writer Charlotte Armstrong.  The subject matter is one that has been covered many times before.  The best example being The Bad Seed [1956] which is one of my all time  favorites in the "disturbing children" category.  The problem with this episode is that the "twist" actually robs the film of its power.  It's always more interesting to go darker than lighter and The Mark of the Hand misses its chance to shock the audience.
That being said, there is still some good ensemble acting here, although no one gives a riveting persormance.  It's run time of 50 minutes could actually have been trimmed to half an hour show and the episode would not suffer at all.  This one is good.  It's just not as strong as some of the other entries in the Thriller TV series
RATING: Good.
For more info check out the episode's entry in IMDB.
Posted by Zombiefan at 4:42 PM No comments: