Monogram Pictures produced low budget films from 1931 to 1953 and was a part of a group of studios referred to as "Poverty Row."  This one includes the great John Carradine as Dr. Charles Randolph, a "mad scientist" who is experimenting with creating life out of death.  If it wasn't for Carradine's solid performance, this one would be in serious trouble.  The rest of the cast runs from just O.K. to downright cartoonish.

This low budget thriller brings nothing new to the table in terms of storytelling.  The storyline was done infinitely better in Frankenstein (1931) as well as a number of other horror movies that followed in the years to come.  The budget constraints of The Face of Marble definitely show.  The sets and cinematography are simple.  The plot is unimaginative and formulaic.  Furthermore, the overall impact of the film was not helped by the quality of the print I watched which was streamed to my TV via Netflix.  It was slightly blurry and jittery.  Argh!  Hopefully a better copy of this film exists out there somewhere. Netflix version is God-awful.

I just couldn't get too excited about this film.  Even at a brisk run time of 72 minutes, it felt SO MUCH LONGER.  Skip this one unless you're hard up for entertainment.

The Spell is a pleasant surprise.  Although much of the soundtrack sounds like an ABC After School Special, this one delivers the goods more times than not.  [It was a made for TV movie so that explains a great deal.]  The Spell chronicles the life of the dysfunctional Matchett family.  Dad is mostly absent and disconnected, except when he's yelling at someone.  Mom, [played wonderfully by Lee Grant] is trying her best to keep her family from falling apart.  They have two daughters, the youngest of which is pretty and popular.  A very young Helen Hunt does a nice job with this character.  Finally, there's the "fat sister" [although there's nothing fat about her]  who is bullied by her peers and her parents.  Sweet little Rita also has magical powers which she uses to exact her revenge upon those whom she deems a threat to her happiness.  [Think of Rita as Carrie's kid sister.]  Susan Myers [Revenge of the Nerds, James at 16] is wonderful as Rita.  While she doesn't have the intensity of Sissy Spacek in Carrie, she delivers the goods and hits all the right emotional notes throughout the film.

While the cinematography feels a bit dated for the late 1970's, the pacing of the film is good and the tension keeps increasing until it hits a fevered pitch toward the end of the film.  Furthermore, there's a small surprise in the climactic moments of The Spell that works very well.

While The Spell is not in the same league as other late 70's classics such as Carrie and Fright Night, it's surprisingly good and I was thoroughly entertained by it.  Don't miss this one.  It's a neglected gem of late 70's TV horror. [You can stream this one on Netflix.]

Posted by Zombiefan at 10:42 AM No comments:

Is the Pentagon or the Pentagram behind this heinous attempt at political satire/horror?  Reviews for this one on IMDB are all over the place.  I saw Werewolf of Washintgon as part of Elvira's Movie Macabre show where she adds her pity comments to the film from time to time.  To be honest, Elvira's comments were much more entertaining than the film itself.

I had high hopes for this low budget flick since the star of Werewolf was Dean Stockwell [Quantum Leap].  Alas, he gave it his best but it just didn't work for me.  Werewolf is sometimes unintentionally funny as well as intentionally funny.  I laughed from time to time but the laughs were few and far between.

Secondly, the make up job on Stockwell is simply horrible, especially the transformation scenes.  They did it better in the 40's!  Not to mention he takes off his shoes before his transformation but, inexplicably, his tailored suit fits fine once he's in full wolf mode.  He looks a bit like a furry John Travolta in Saturday Night Fever.  Scary?  Hardly.  Funny?  Somewhat.

I'm definitely the kind of guy who can appreciate a "so bad, it's good" kind of movie.  But Werewolf in Washington is just plain bad.  The idea behind this film is good.  It's simply executed too poorly to be enjoyed.

Posted by Zombiefan at 2:33 PM No comments: 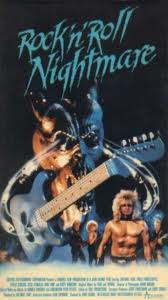 Sex, demons and rock n' roll.  That's all you really need to know about this hair metal horror story by the indestructible John Mikal Thor.  Yes, the acting is marginal and the plot is a bit confusing at times.  But, hey, who cares?  This one falls into the sublime category of "so bad it's good."  If Spinal Tap did a horror film. this would be it!

For those who have no clue who John Mikal Thor is, he's the pioneer of "Muscle Rock" and has been around since the early 70's and still continues to tour and release new music to this day.  Thor was a busy man on this project.  Like a heavy metal M Night Shyamalan, Thor wrote the screenplay and the music, co-produced and stared in this tale of the fictional rock band Triton who hole themselves up in a secluded farm house to record a new album.  Everything is hunky dory until band members start disappearing one by one.  Along the way there are plenty of boob shots, demonic puppets and crunching AOR guitars.

Kudos to the special effects team for their inventive, weird and often funny monsters.  They are definitely one of the highlights of this film and are quite amusing.  Overall, there is something endearing about Rock n' Roll Nightmare that would compel me to watch it again sometime.  So, grab a few friends [and a few beers] and bang your head to this strange but entertaining film.

Posted by Zombiefan at 6:31 PM No comments: 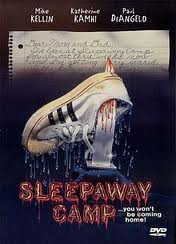 Bad. Bad. Bad.  Did I mention that Sleepaway Camp is bad?  This Friday the 13th rip off is dreadful.  I know some critics sing its praises on IMDB but I just don't get it.  The acting is absolutely wretched.  Lots of bad NYC accents and characters we simply don't care about.  Every cliche in the book is here from the pedophile camp cook to the mean kids who bully the weak ones.  It's been done before and done so much better.

So what is the appeal of this film?  I can only believe it's the joy of watching these wretched characters being killed off one by one.  Let me count the ways...death by boiling water, drowning under an overturned canoe, bee swarm in a toilet stall, knife through a shower stall wall [I sense a water theme going on here.  Freud would have a field day!], curling iron [An A+ for originality], an archery arrow through the throat and a beheadding.  The only surprise is the ending where we find out [spoiler alert] that the female killer is actually a boy who was raised as a girl.  Now, that's a pretty surprising ending.  I didn't see that one coming at all.  However it doesn't make up for all the bad acting and poor special effects that pave the path to the final scene.

As a final note, Sleepaway Camp spawned four, count them, four sequels.  For the love of cinema, I cannot bring myself to endure another moment of this franchise. If you've seen them, let me know how they stack up to the original!  My suspicion is it's more of the same. 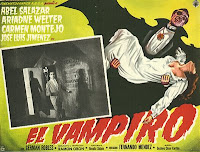 Who knew that there was so much dim lighting and fog in Mexico?  El Vampiro [The Vampire] is a gem of a movie.  I saw it last night at our local cinema that shows a free vintage horror film every Thursday evening!  El Vampiro was an inspired pick.  While the story is pretty much standard vampire stuff, the overall look of the film and the quality of the acting set it apart from many films in this sub-genre.  Director Fernando Mendez and cinematographer Rosalio Solano know how to do a lot with a limited budget.  Each scene is composed with great care and is very moody and atmospheric.  While the theme song gets a bit repetitious to the point of being annoying, it definitely adds to the over feel of the film.

The acting in El Vampiro is excellent. [I saw it in Spanish with English subtitles.  The only way to view it as far as I'm concerned.]  German Robles makes a wonderful vampire and has a commanding presence on screen.  I understand he's quite short of stature but this is not noticeable on screen.  His female vamp counterpart, played by Alicia Montoya, is absolutely radiant.  She looks amazing on screen and has a mesmerizing presence that cannot be denied.  The rest of the cast is excellent as well.

El Vampiro is really worth tracking down.  [You can rent it on Netflix.] It's in the same league as the 1931 Spanish version of Dracula that was filmed on the same sets as the Lugosi version.  Were all vampire films this good we would be fortunate.  It was a delight from start to finish.

Posted by Zombiefan at 8:40 AM No comments: