Can a 1970's made-for-TV, G-rated movie be scary?  In a word...No.  The acting is fine in Moon of the Wolf and includes some major character actors from the 1970's such as David Janssen [Harry O] and Geoffrey Lewis [The Lawnmover Man, The Devil's Rejects].  However, they don't have much material to work with.  This bloodless and virtually werewolf-less film is dull and lacks any kind of major suspense.  When the wolf finally appears, it is groan-worthy to say the least.  Had this been a feature film and the horror elements could have been added, it might have been a decent movie.  As it is, it's totally forgettable and a waste of time.

Move on, people, there's nothing to see here!

Posted by Zombiefan at 2:48 PM No comments: 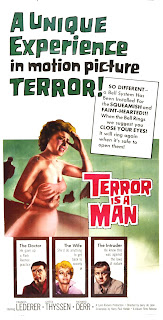 First there was Island of Lost Souls (1932) which took an H.G. Wells story and made it come alive in all its terror and horror.  Not surprisingly, someone would set out to remake it over twenty years later.  Terror is a Man is the result.  [NOTE: This was also remade in 1977 and 1996 as The Island of Dr. Moreau.]  Unfortunately, this version comes nowhere near the 1932 classic.

First of all, they start with a William Castle-like disclaimer that a warning bell will sound during the film before scenes too horrific to watch are coming up.  It is suggested that the faint of heart close their eyes until they hear the bell again.  Needless to say, I kept my eyes wide open and there wasn't a single scene that merited this kind of warning.  Boo hiss!

The main problem with Terror is a Man is that it has a weak script where not much happens for most of the film.  They needed to get into the meat of the story right away and this simply doesn't happen.  With a run time of only 89 minutes one would think it would be helpful to move the story along.  Unfortunately this is not the case.

Director Gerardo de Leon does a decent job with the material he's been given. Furthermore, the actors do a fine job all around.  The problem is that no one has much material to work with.  After having enjoyed the 1932 classic I was so disappointed in Terror is a Man.  Stick with the original and also watch the 1996 version with Marlon Brando and Val Kilmer.  They are the best of the bunch.

Posted by Zombiefan at 11:46 AM No comments:

When director Tobe Hooper makes a movie, I always stand up and pay attention.  Films Like The Texas Chainsaw Massacre (1974) and Poltergeist (1982) show a director who is a master at his craft.  Sadly, The Funhouse is not quite up to my expectations of Hooper.

Let's start with the good stuff.  In a year where a plethora of bad slasher flicks abounded, The Funhouse is not one of them.  It's got a decent script and Hooper's direction is far above and beyond the rest of the pack.

It's also got a fun, deformed monster courtesy of Rick Baker.  While it's not as terrifying as some of his other creations, it's very well done for the time period and is both intriguing and a little gross.  It works well in the film.

The big negative for me is in terms of pacing.  The story begins with four crazy kids who decide to spend the night in The Funhouse at a local carnival.  Hooper spends WAY too much time setting things up.  We get introduced to the characters right away and then we watch them running around the carnival for about half an hour.  Why?  I'm not sure.

Perhaps they were trying to build sympathy for the characters but Elizabeth Berridge is no Jamie Lee Curtis [Halloween].  Playing the role of "survivor girl," I found her more annoying than heroic.  She lacks all the qualities that made Curtis so great.  Ugh!  They simply needed to move into the meat of the story MUCH earlier.  There's a lot of material to work with that they simply don't take advantage of.  For instance, a bit of backstory on the Monster would have been great.  What was he like when he was growing up?  How did he end up where he is now?  I think you get my point.

If you're a fan of Hooper, you definitely need to see this film.  But I consider it to be one of his weakest films.  If you don't know anything about Hooper then start with the other movies I mentioned above.

Posted by Zombiefan at 6:34 PM No comments:

Let the bodies hit the floor!  Mario Bava's Bay of Blood stays true to its title.  The first murder out of the gate is both shocking an unexpected as an elderly heiress is creatively killed by her husband who wants control of her money.  What follows is a muder-palooza as friends and relatives try to be the last one standing to inherit the old lady's fortunes.  Bava's brilliance is that you never quite know what's going on.  With multiple murderers, the viewer is often led on a wild goose chase that is quite different from modern slasher flicks.

Bay of Blood is pure Bava with interesting camera work and impeccably controlled lighting.  This cast includes everything from a group of "carefree kids" spending a weekend of debauchery to a "crazy" tarot reading woman who steals just about every scene she's in.  Melodrama abounds!  It's the kind of thing you expect with Italian horror.

While Bava is not for everyone, one has to admire his passion for filmmaking and his ability to create an atmosphere that's slightly hyper-real and a bit "off."  While this is not my favorite Bava film, it is definitely well made and is well worth your time.

Posted by Zombiefan at 1:34 PM No comments: