It doesn’t matter whether Bava is at the helm of a gore-fest such as Kill, Baby, Kill (1966) or a Sci-Fi adventure such as Planet of the Vampires (1965), Bava knows how to make a gorgeous film.  He lights his sets in a very controlled way that reminds me of Alfred Hitchcock.  His attention to set detail, camera angles and overall scene composition is impeccable.  The Whip and the Body is no exception to this rule.  It’s a supernatural thriller that is almost bloodless but pure Bava through and through.

The story revolves around a sadistic 19th century nobleman who was murdered long ago.  Now his ghost haunts and torments the current residents of his castle.  Christopher Lee plays the nobleman in question.  He’s great in this role and plays it with finesse and subtlety.  In a way, his character is a 1963 version of Pinhead from Hellraiser because he loves to mix pleasure with pain.

The main target of his torment is a gorgeous Italian actress by the name of Daliah Lavy who lights up the screen in every scene she’s in.  She has a commanding presence and   wonderfully expressive eyes that can convey sheer terror without her saying a word.

If you’re a fan of Bava this definitely needs to be on your list.  If you like supernatural thrillers with an artistic flair, this one will fit the bill nicely.

Conspiracy of Torture a.k.a Beatrice Cenci (1969)

Italian horror director Lucio Fulci has impressed me with his artistic view of zombies, especially in films like Zombi 2 (1979) and City of the Living Dead (1980).  Conspiracy of Torture is a film of a different nature altogether.  It feels like a really graphic documentary about an Italian noble family from the 16th century that endures sadistic torture at the hands of an abusive father.  Think National Geographic meets Eli Roth.

Surprisingly, this film received a 6.4 rating on IMDB.  I just can’t get that excited about it.

Posted by Zombiefan at 11:24 AM No comments:

There seems to be no end to the variations and incarnations of the Frankenstein story.  In this version, we have the incomparable Peter Cushing [Star wars, Horror of Dracula] who would play the role of Baron Frankenstein a total of seven times in his career.  He’s always great in this role, bringing both warmth and intellect to the character.  Thankfully, Hammer Horror is also at the helm of this picture which means sets rich with detail, a collection of great actors and a strong soundtrack to support the mood of each scene.  Director Terence Fisher [Horror of Dracula, Curse of Frankenstein] is also on board and does a beautiful job with great scene composition, pacing and character development.

Unlike some films where the audience could care less about those on screen, save the monster, Frankenstein Created Woman has a heart-centered story which is due to a smart script and great performances from everyone in the cast.  The viewer is sucked into the story from the opening scene where a young boy witnesses the execution of his father.  Years later, this same boy [now a man] and a disfigured young woman take center stage in this horror drama.  It’s the perfect way to anchor the story and give it the emotional depth great films need.

This is not your typical Frankenstein story where the Baron is mad and the monster takes center stage.  This is a Baron who is pushing the limits of science and then employs that silence to try to make things right later in the story.

You can’t go wrong with Frankenstein Created Woman.  It is one of the best Frankenstein stories out there that relies less on horror and terror and more on story and character.  Don’t miss it.

Posted by Zombiefan at 1:54 PM No comments:

In spite of the ridiculous title, Pillow of Death is actually a decent thriller that marks the end of the Inner Sanctum Mystery series.  Director number four is at the helm and Wallace Fox [The Corpse Vanishes, Bowery at Midnight] restores the integrity of the series, ending on a high note.

Lon Chaney Jr is back.  This time he plays attorney Wayne Fletcher whose wife is found smothered to death.  He becomes the prime suspect, but not all is as clear as it seems.  Pillow of Death has great pacing and a classic who-dunnit script with a few nice twists along the way.  This film is as good as the first three in the series and is quite enjoyable.  The voice-overs that were prevalent in the earlier films are gone.  To be honest, they were wearing a bit thin so I’m glad they decided to change things up a bit with this film.

This is just a classic 1940’s thriller.  It’s hardly innovative but it is quite enjoyable. 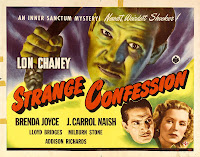 Melodrama starts here!  Ugh!  Strange Confession is the fifth of six films under the title Inner Sanctum Mysteries.  Things are starting to wear a bit thin, needless to say.  With director number three at the helm, John Hoffman, we are treated to a slice of melodrama that has little to do with either horror or thriller.  It’s exhausting to say anything about this tepid little film except that it has Lon Chaney Jr [who has no material to work with whatsoever] and a young Lloyd Bridges who makes a brief appearance.

The Frozen Ghost is number four in a series of six films under the title Inner Sanctum Mysteries.  Harold Young [The Mummy’s Tomb] is a new director in this series and he does a decent job with the material he’s been given.  Unfortunately Frozen Ghost steals much of its plot from the 1933 classic The Mystery of the Wax Museum.  To add insult to injury it doesn’t do a great job with the material either.

This is not to say the acting is bad.  Lon Chaney is solid as Alex Gregor, a stage mentalist who is convinced he has killed someone solely by the power of his mind.  If Young had stuck with this storyline it might have worked.  But then the wax museum material gets introduced, it begins to feel like two movies in one.

Universal Studios probably cranked this picture out very quickly and it shows.  It might have amused audiences in the 1940’s but it’s definitely one of the weaker films in this series.

I truly appreciate the artistic genius of Dario Argento in films such as Phenomena (1985) and Suspiria (1977).  Therefore, I had high expectations when I sat down to watch Tenebre.  Unfortunately those expectations were not met.  Forget the 7.0 approval rating on IMDB.  This film was dull and unimaginative.  I consider it to be one of the weakest films in Argento’s career.

The plot lacks any sense of imagination or originality.  The story centers on an American writer who is being stalked by a serial killer who seems determined to eliminate anyone associated with the publishing of his latest book, Tenebre. [Yawn!]  That’s all you need to know and that’s all you get!

I know it’s probably blasphemy to speak ill of Argento but Tenebre feels like a film he made in order to get a paycheck.  If anyone out there loves it, tell me why.  I’m all ears.  As far as I’m concerned, fans should stick with the two other films I mentioned in this review which are truly amazing films.

The Evil Dead is Sam Raimi's first feature film and, wow, what an impression he made!  This writer, director and executive producer gave us what can only be described as a living Road Runner Cartoon on horror steroids.  It's disgustingly gross, quite funny at times and takes the viewer on one crazy ride.  If you don't have a stomach for gore, sit this one out.  If you do, then let the blood begin flowing!

The story starts when five friends go to a cabin in the woods where they stumble upon an ancient book and a reel to reel tape which provides an audio translation of what is written there.  Once the tape is played, all hell breaks loose: the "demon cam" takes you on a roller coaster ride through the woods.  Friends start becoming demon-possessed flesh-munching monsters.  Blood flows more freely than it does at the Red Cross.

Bruce Campbell is crazy wonderful as the film's swashbuckling hero, Ash, who undergoes a transformation from scaredy cat to full-on zombie slayer by the end of the film.  Ash is an anti-hero in the sense that he is less Buffy the Vampire Slayer and more your average guy who rises to the occasion.  He doesn't have any special powers but, somehow, finds a way to get the job done.  The rest of the cast is great as well and bring the mayhem to life in an over-the-top style that serves this movie well.

In an age that is pre-CGI, the effects in this movie are quite creative in their use of prosthetics and sight gags.  Furthermore, the claymation meltdown at the end of the film is simply a work of art.  CGI makes things much easier for filmmakers today to bring to life anything they can imagine.  I found myself appreciating the hard work and old fashioned inventiveness that made this film leap from the screen and into the viewer's lap.  It is one intense viewing experience.  The Evil Dead is not for everyone but if you loved 2009's Zombieland, then this film is definitely your cup of tea [or bucket of blood as the case may be].  This one can be watched instantly through Netflix or rented everywhere.

Excellent.
For more info check out the film's entry in IMDB.
Posted by Zombiefan at 7:15 AM 1 comment: