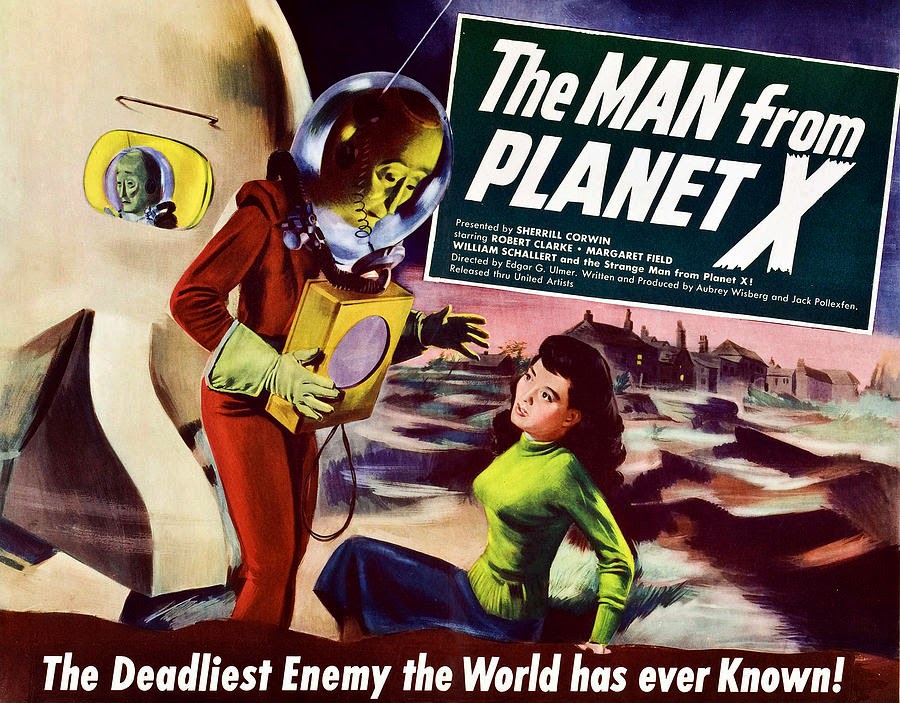 Depending upon whom you read, The Man From Planet X is one of the first, if not the first, science fiction film where aliens make contact with earth.  Director Edgar G. Ulmer (The Black Cat) works with half-a-shoestring budget of $50,000 and an so-so screenplay and comes up with a film that’s better than both!

The story begins when an astronomer discovers a mysterious planet he ingeniously calls “Planet X.”  [I bet it took him a long time to think up that one!]  Why a planet is hurling through space is anyone’s guess [It should have been a comet or asteroid] but you just have to go with it!

Meanwhile a mysterious spaceship lands nearby that looks a bit like a Christmas tree ornament!  It’s barely big enough to house the alien inside, but, again, you just have to go with it!  When the alien is finally revealed, his large expressionless head looks like a piñata stuffed into a space helmet.  Thankfully the two people who are credited as providing the special effects on this film have extremely short resumes.

In spite of these drawbacks, the acting is quite good and the film is paced nicely as well.  The only familiar face in the cast is character actor William Schallert [True Blood] who plays the “always-sneaking-around and is probably up to no good” Dr. Mears.  The only female in the cast, Enid Elliott, played by Margaret Field, assumes the role of research assistant/perfect 1950’s housewife and does little more than talk excitedly and wait for the men to check things out!  Sigh!

The Man From Planet X is not a bad film.  For $50,000 it’s astonishing.  If the studio was only able to spend a little more on the alien and the spaceship, it could have been a very good movie.  As a final note, I streamed this movie in Netflix and the print was quite dark.  I’m sure there are other alternatives out there so be prepared!

Posted by Zombiefan at 1:46 PM No comments:

Frankenstein and the Monster from Hell (1973)

Frankenstein and the Monster from Hell is the last of the Hammer Horror Frankenstein films.  This time around it feels like they simply ran out of new ideas to enliven the sub-genre.  Yes, the setting is different: an insane asylum.  Yes, the monster is different: It looks like a big-lipped ape on steroids.  Yet, everything feels all too familiar and predictable.

Peter Cushing stars as Baron Victor Frankenstein who assumes the alias of Dr. Carl Victor.  Yawn.  Cushing is very thin in this film and has a very gaunt face.  However, he is still as intense as ever and carries the movie by his strong magnetic presence.  This version of Frankenstein would definitely be a lesser film without him.

The doctor's assistant, Simon, is capably played by Shane Bryant [Captain Kronos: Vampire Hunter, Lady Chatterley's Lover] but is almost too handsome for the role.  Considering what heinous crimes he's committing a little grittier look is definitely in order.

The special surprise is that the Monster is played by David Prowse who would go on to become a film legend as the looming Darth Vader in Star Wars IV, V and VI.  [Prowse wore the suit for the character in Star Wars while James Earl Jones supplied the voice.]  His sheer physical presence is impressive but Prowse was much better as Vader than he was as the Monster.

The usual details we've come to expect from Hammer Studios are all present in Frankenstein: gorgeous sets, nice cinematography, solid acting, and a good film score.  The problem is I just can't get too excited about it.  If you're going to remake Frankenstein [which has been done a thousand times over] you really have to bring something special to the table.  This incarnation of Frankenstein is tepid at best and, for this viewer, feels as warmed over as the Monster's corpse!