The War of the Worlds is classic 1950's Sci-fi based on the novel by H. G. Wells.  It's a "cast of thousands" end of the world drama with lots of those cheesy 1950's special effects we know and love.  Byron Haskin [Robinson Crusoe on Mars, Treasure Island] directed this film.  He spent his early years in Hollywood designing special effects so he's the perfect director for this movie.  He also had the one and only Cecil B. DeMille (uncredited) as well as George Pal [director of The Time Machine and Atlantis, the Lost Continent] as his producers.  It's hard to go wrong with that.

The set up is simple: A mysterious asteroid crashes in a remote area outside of town…but it's no ordinary meteor since it holds a Martian spaceship.  You probably know where it goes from there!

The cast is fine but only Les Tremayne [Bonanza, Perry Mason] stands out as Major General Mann.  He has a commanding presence on screen that is hard to ignore.  The two romantic leads are another story altogether.  Gene Barry is Dr. Layton Forrester.  He's the main scientist who is trying to figure out how to defeat the Martians.  His performance is a little lethargic at times.  This is due to his eyes which are often expressionless.  His main squeeze is 1950's femme fatale Ann Robinson who plays Sylvia Van Burren.  Unfortunately, they give her far too little to do in the movie except scream hysterically and fall into the arms of her man for protection.  She also cooks breakfast in an abandoned farm house like any good 1950's housewife would do!  Sigh.

A little extra treat is the one and only Sir Cedric Hardwicke [The Ghoul, The Invisible Man Returns, The Ghost of Frankenstein] who does the voice-over commentary in the film.  He gives it the gravitas one would expect from such a horror icon.  A really good reboot of The War of the Worlds was done in 2005 starring Tom Cruise and Dakota Fanning.  This modern remake ups the special effects and increases the drama and suspense tenfold.  Don't miss this classic film!

Posted by Zombiefan at 2:15 PM No comments:

Some movies do NOT need a sequel.  Such is the case with Ghoulies.  For me the original film worked because of its creative, slimy puppet creatures and its dark, spooky atmosphere.  [See my review elsewhere on the site.]  Yes, the acting was a bit over the top but this gave Ghoulies the feel of a Road Runner cartoon which served it well.

Alas, I cannot give the same praise for Ghoulies 2.  First of all, the plot has holes and inconsistencies all over it.  Secondly, the setting of a haunted house in an amusement park should have worked well but it doesn't.  Too much of it is brightly lit which diminishes the atmosphere and makes the puppet creatures look less believable than in the first film.  Thirdly, the acting is simply God-awful and some of the lines of cringe-worthy dialogue only make it worse.

Finally, the most frightening thing about Ghoulies 2 is that it spawned another film...Ghoulies 3: Ghoulies Go To College (1991).  I watched the first 10 minutes of it and it was dreadful. It's sad that the brilliance of the first film was never duplicated. 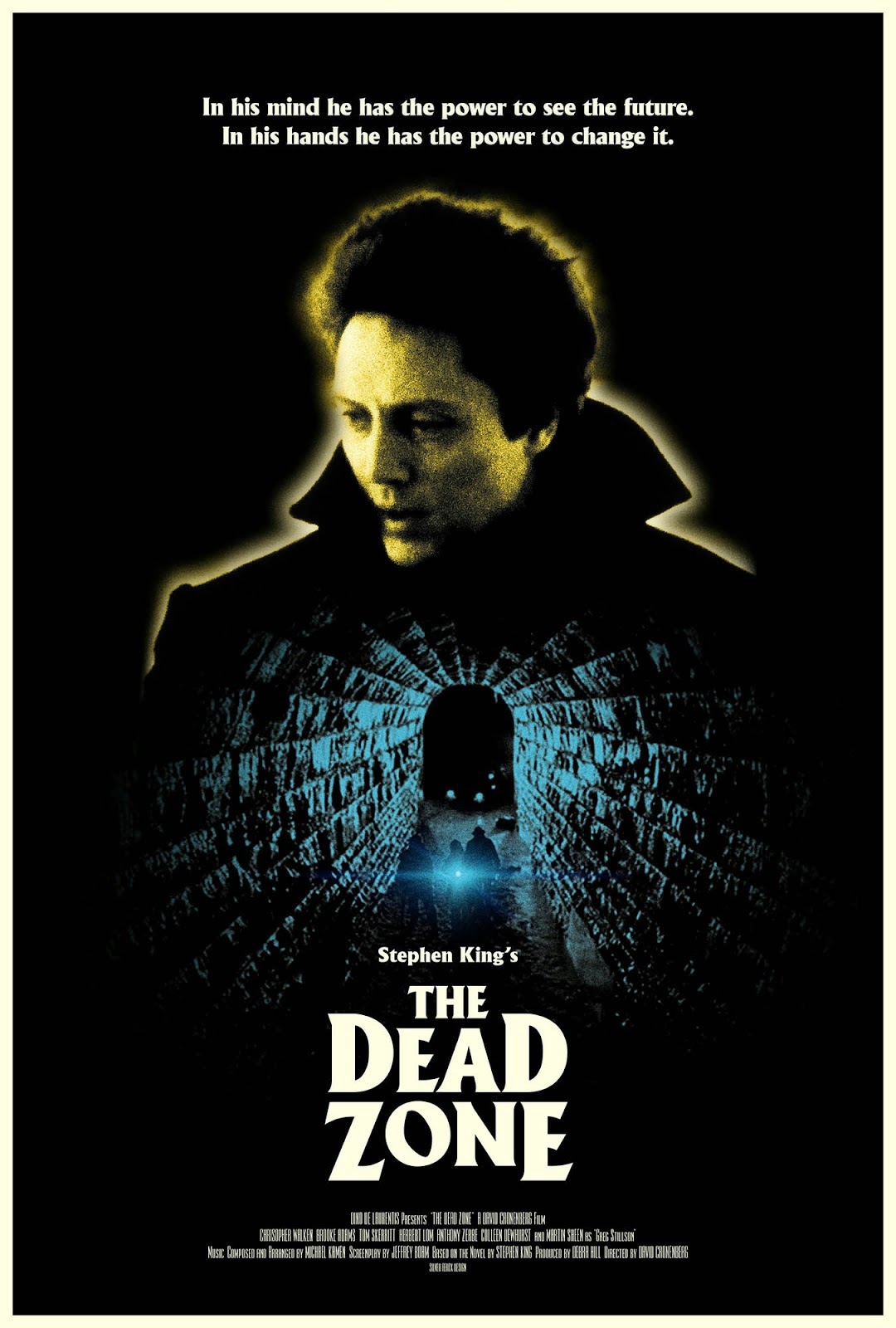 What would you do if you had the power to see the future?  If it looked ominous, would you try to change it?  This is the theme that The Dead Zone explores in a way that is both simple and profound.  The film is based on the Stephen King novel of the same name which was written in 1979.  It was King's first book to reach number one of the bestseller list.

The Dead Zone's success is attributed to a great performance by iconic actor Christopher Walken [Sleepy Hollow, The Prophecy] who plays Johnny Smith, you're average guy who awakens from a coma to discover he has psychic abilities.  Walked is in the capable hands of director David Cronenberg [Videodrome, Scanners] who shows remarkable restraint with The Dead Zone.  While I love the crazy images he often brings to the screen, he handles with film with a subtle but powerful tough.  It's a bit of a slow burner in terms of action, but the film keeps building suspense until the final scene.

Other notable performances include Martin Sheen who plays the slightly crazed, power hungry politician Greg Stillson to perfection.  Has sSheen ever made a film he wasn't good in?  None come to mind!  Brooke Adams is sweet and radiant as Walker's spurned love interest, Sarah.  She brings a warmth to the role that gives the film lots of heart and helps to bring our Walken's tender side. [Yes, he has one!]  There are also fine performances from a bevy of classic character actors including Tom Skerritt, Anthony Zerbe and Colleen Dewhurst.

The Dead Zone is one of those Sunday afternoon movies that you simply can't stop watching.  It draws you in and keeps your interest form start to finish.  If you like lots of action, you might get a little bored but if you ponder the questions this film asks, your viewing experience will be greatly rewarded.

Posted by Zombiefan at 2:53 PM No comments: