We lost one of the greats yesterday.
Thanks for all the scares and unforgettable films! 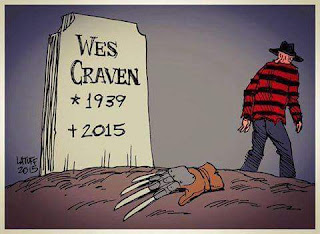 Posted by Zombiefan at 11:33 AM No comments:

Simply stated, The Last House on the Left is one of the most brutal, disturbing and realistic horror films ever made.  It's impossible to call it entertaining.  It's a non-flinching look into the psyches of a group of seriously sadistic individuals.  The film asks a similar question that Craven raised in The Hills Have Eyes: "What lengths would you go to in order to defend yourself and your family?  How low can you go in order to survive?
The film starts out warm and sunny and along the way gets darker and darker.  The reason why this film is so powerful is that the camera rarely, if ever, looks away from the horrific violence that is shown in the screen.  It takes the viewer to a very deep and dark place that leaves them feeling a little queasy to say the least.  Some people may consider this film to fall into the "torture porn" category.  However, I would disagree.  The brutality of Last House is never gratuitous.  The viewer cares for the two young girls very deeply.  It is not entertaining to watch them die.  It is painful and sad which is not really the feeling you get when watching modern films like Hostel and Saw.  Craven does something far more creative here.  He gives us a front row seat to watch a side of humanity we really don't want to admit exists...but it does!
Last House was remade in 2009 with Dennis Iliadis directing and Wes Craven as one of the producers.  It is a very good film in its own right and adapts the original story with great care, leaving the basic plot intact.  It is also extremely brutal and graphic at times and has the same effect on the viewer as the original.
As many of you know, Wes Craven was raised in a fundamentalist Christian home.  Needless to say, Last House on the Left is one hell of way to rebel against your parents!  This movie is NOT for the faint of heart.  It is both shocking and thought-provoking and holds up rather well even after almost 40 years.
RATING: Very Good.
For more info check out the film's entry in IMDB.

This film should have been the sequel to the original Nightmare film.  Nearly everything about it works.  First of all, Wes Craven was one of the authors of the screenplay and also signed on as executive producer.  His influence is clearly evident with a much stronger story than Freddy's Revenge and a more ominous feel to the movie overall.  This is also helped by director Chuck Russell [The Mask, Scorpion King] who has put together a decidedly darker and more emotionally powerful film than Freddy's Revenge.

Cinematographer Roy H. Wagner [Nick of Time, Drop Zone] gives us a visual feast while the special effects team delivers many inventive and eye-popping moments that are truly entertaining.  Furthermore, composer Angelo Badalamenti [The Beach, Dominion: Prequel to the Exorcist] takes the baton from Charles Bernstein, the composer of the first film.  He picks up several of the musical themes from the original score and adds his own touches.  All of these elements work together to create a strong look and feel for the film.

Perhaps the biggest blessing of Dream Warriors is the cast.  Thank God, Heather Langencamp is back as Nancy.  This time out it's six years later.  She's graduated form college and is interning as a psychologist who specializes in dream therapy.  [Nice touch!]  Langenkamp is joined by a great cast, some of whom went on to become big Hollywood stars such as Laurence Fishburne [The Matrix Trilogy] and Patricia Arquette [T.V. Medium].  John Saxon makes a small appearance to reprise his role as Nancy's Father.  Finally, the teens in the psych ward are all very good actors and help to make this Dream Warriors of the strongest casts of the Nightmare Franchise.  Robert Englund is back, of course, as Freddy.  This time out he has less screen time and develops his one liner wise cracking style that would dominate some of the later films.  It's not his strongest Freddy performance but there is no one else who can really fill his shoes.  [I hate the new modern remake of A Nightmare on Elm Street.  Jackie Earle Haley's portrayal is pure brutality with no sense of humor or playfulness about.]

I could go on but I think you get the point.  I love this film.  It's one of my favorites in the franchise and proves that when Wes Craven is involved it's always a better movie than when he's not.

I absolutely LOVE The Serpent and the Rainbow and never get tired of watching it.  I consider it to be one of Wes Craven’s most underrated films that deserves a wider audience.  The overall look and feel of the film is tense and mysterious.  This is accomplished through the use of color, subtle but effective special effects, and an amazing atmospheric soundtrack.  Kudos to cinematographer John Lindley [Legion, The Good Son] for giving us a feast for the eyes.  The colors in this film really pop and the lighting is near perfect.  His best work is in the voodoo scenes which vibrate with color and manic energy.

Serpent tells the story of Haitian/West Indies zombies that is presented in such classic films as White Zombie (1932) and I Walked With a Zombie (1943).  It’s based on the book by the same title which was written by Wade Davis.  The screenplay adaptation by Richard Maxwell and Adam Rodman is brilliant and takes the viewer of an Argento-esque ride where it’s sometimes hard to tell the difference between fantasy and reality.  Serpent never insults the intelligence of the audience and keeps you spellbound throughout the entire film.

Director Wes Craven is the maestro of this crazy ride.  He knows how to make all these elements work together flawlessly.  He also paces this film perfectly with lots of ups and downs that build to a fevered pitch at the end.  Serpent is a great example of his considerable talent when he brings his A-game to the table.

A final word about actor Bill Pullman [Independence Day, The Grudge] whose character is the heart and soul of this film.   He plays the “fish out of water” anthropologist who is trying to understand this mysterious world.  Pullman gets every scene right and gives it all the wonder and terror it deserves.  With a lesser actor in this role, Serpent could have been a miserable failure.  He was the perfect choice for this film.

Make sure you see this one.  There is nothing else quite like it.

Profoundly disturbing and exceptionally well made, The Hills Have Eyes is a masterpiece in terror.  The story begins with your average all-American family who is traveling across the country to California.  They break down in the desert and are quickly attacked by a family of vicious cannibals.  The movie asks a simple question: "What are you willing to do in order to survive?"  What follows is 90 minutes of cinematic perfection by writer/director Wes Craven [Nightmare on Elm Street, Scream].
The Hills Have Eyes stars a young Dee Wallace [She played the mom in E.T.] and the super creepy Michael Berryman [The Devil's Rejects].  Everyone in the cast is great and Craven pulls terrific performances from the entire cast.  The sense of dread and tension in this movie is unrelenting, and that's a good thing.  This movie is so scary because there are no fantasy elements here.  Craven not only makes us believe this could happen, he also makes us believe it could happen to us!  Hills is not escapist fare, it makes us confront human nature at it's most brutal and unimaginable worst.
This movie is definitely not for the faint of heart.  However, it is quite possibly the best of its kind.  Hills cannot be viewed anywhere legally online that I know of but the two disc DVD release that was done by Anchor Bay is the best print of the film I've seen.  It also includes two excellent featurettes "Looking Back on the Hills Have Eyes" and "The Films of Wes Craven."  Don't miss The Hills Have Eyes.  It is a powerful and thought-provoking film, indeed.


RATING: Excellent.
For more info check out the film's entry in IMDB.

I was a teenager when this miniseries hit the small screen and it scared the pooh out of me, especially the scene where the teen vampire os scratching on his friend's window.  I think I had nightmares about that for a week afterward!  Salem's Lot is a slow burning suspenseful thriller that is some of the best horror 1970's TV had to offer.  Based on a wonderful story by Stephen King under the masterful direction of Tobe Hooper [Texas Chainsaw Massacre, Poltergeist], Salem's Lot captures a feeling of dread that doesn't let go from start to finish.  Some people might be surprised that Hooper would be capable of directing such a subtle thriller but a great director is a great director.  He definitely hit this one out of the ballpark.

Salem's Lot has a dynamite cast with some of the best character actors of the 70's popping up all over the place.  David Soul [Starsky & Hutch] plays novelist Ben Mears who has come to Salem's Lot to write his next novel.  His sidekick in fighting the vamps is Lance Kerwin [James at 16] who plays a young horror fan.  Both of them are great.  Also included in the cast are James Mason [North by Northwest, 20,000 Leagues Under the Sea], Elisha Cook, Jr. [Rosemary's Baby], Geoffrey Lewis [The Lawnmower Man, The Devil's Rejects] and a dozen more I don;t have time to mention.  They might not be household names but you have seen them in EVERYTHING!  Kudos to the producers and casting director for being able to assemble such an amazing group of actors and actresses.

Posted by Zombiefan at 12:22 PM No comments: