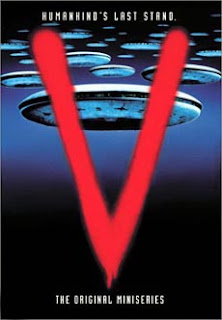 V is proof that a TV miniseries can be well-made and stand the test of cinematic time. Yes, it's got a number of 1980's giggle-worthy moments but, by and large, it's well made and well acted. The main thing that makes V work is it's intelligent screenplay. It starts with visiting aliens that appear as menacing as your grandma. Then, slowly, details are added which make you realize they are visiting earth with evil intent. The build-up is near perfect and makes for enjoyable TV watching.

I remember watching this when it first came out.  I was a fan of Marc Singer who had a hit a year earlier with The Beastmaster. He plays a TV cameraman in V and nails it perfectly. However, the best surprise is the appearance of Robert England who would become Freddy Krueger in A Nightmare on Elm Street the same year. His role as the lovable alien Willie is quite a contrast from the menacing Freddy, which goes to show his underrated range as an actor.

One of my favorite scenes is when Singer boards one of the alien ships and ends up tussling with one of them when his hiding place is discovered. As the human mask of the alien is pealed away, it reveals a reptilian creature whose face is well done and effective.

V would spawn another miniseries, V: The Final Battle (1984), and two TV series which ran from 1984-85 and 2009-11. I am especially fond of the latter version that is one of the finest remakes out there. If you're a Sci-Fi fan and haven't seen the original, what are you waiting for?

In addition to excellent directing and writing TPUTS benefits from a strong cast including the delightfully demented slum landlord and his wife, played respectively by Everett McGill [Twin Peaks, Silver Bullet] and Wendy Robie [Twin Peaks, The Glimmer Man].  I would much rather spend a night with Freddy Krueger than with these two sadistic cannibals!  Even though their actions are way over the top, both of these actors make their characters seem very real.  Deep in the bottom of your gut you know there are people in our world who are equally as crazy and sadistic as these two which is what makes the film so horrifying.

The kids in the cast are also pretty good as well. Brandon Quintin Adams plays Fool who is the hero who saves the day.  He goes from being an average kid from the hood to bad mamma-jaima who utters the line "I'm tired of fucking around so you either put the gun down now or kiss your ass goodbye, boy!"  A.J. Longer is great as Alice, the daughter they've kept locked up in the house for as long as she can remember and Sean Whalen [Men in Black,Twister] brings a lot of heart and warmth to the story as Roach, one of the kids who lives under the stairs.

The final piece that makes TPUTS work is the incredible set and special effects.  The design of the house is flawless and seems to have an endless number of creepy rooms with secret passageways and tunnels that lead to one horrific room after another. The blood and gore effects also hold up well and definitely made me wince a time or two.

I have always been a Wes Craven fan and admire his visionary spirit and demented imagination.  TPUTS stands the test of time as one of his best and should not be missed.

Posted by Zombiefan at 1:57 PM No comments:

A zombie classic is born!  The Return of the Living Dead begins with a direct reference to George Romero's Night of the Living Dead.  Apparently some of the zombies from that plague were packed in barrels that were filled with a mysterious liquid.  [Zombie pickles?  Fantastic!]  When two bumbling employees discover them in a medical supply warehouse they not only bring one back to life but unknowingly launch a new zombie apocalypse.  The new zombies are a little bit different from the original models.  Unlike their shambling elders, these zombies move quickly like those in 28 Days Later and also have a specific craving for brains instead of flesh.  The result is a thrill ride that is both gory and funny.
ROTLD sports a somewhat cheesy 80's soundtrack but it does have a few good songs along the way.  The mix of comedy and gore is near perfect and the special effects are solid for 80's standards.  The cast of teens is a bit over the top in terms of typecasting but it suits this film just fine.  The main actors, especially James Karen [Poltergeist, Joyride] and Clu Gulager [Feast series] are great and understand how to make the comedic aspects of this film work.  The rest of the cast is solid as well, even though many are simply hors d'oeuvres for the zombie buffet.
ROTLD launched many sequels and solidified the reputation for zombies to be brain munchers.  It also provided some of the inspiration for making Shaun of the Dead (2004) which is definitely my all-time favorite zombie horror comedy.  Definitely watch ROTLD if you have any love for zombies at all.
RATING: Excellent.
For more info check out the film's entry in IMDB.

Posted by Zombiefan at 1:43 PM No comments: