"At the push of a button…things happen…a scientist becomes a beast." Dear sweet Boris Karloff, this is one horrible movie. It's hard to know where to begin! The voiceover from writer/director/narrator/actor Coleman Francis is a good place to start. His "profound" declarative sentences are laugh-out-loud funny even though they're meant to be deadly serious. These take the place of dialogue and are accompanied by an annoying soundtrack that is way too dramatic for what's happening on screen. every once in a while, dialogue happens, and when it does it's badly acted and is often a voice-over instead of live action. Good Lord, deliver us!

The "star" of this show is Tor Johnson who plays the Beast in question. He is a scientist who was the victim of an A-bomb that was set off in the desert. Now, with bad prosthetic make-up applied, he is on a murderous rampage which, apparently, is the side effect of radiation exposure. Ha-ha! For those unfamiliar with Tor Johnson, he is a wrestler turned actor who was immortalized in Ed Wood's god-awful love-to-hate-it trifecta of Bride of the Monster (1955), Night of the Ghouls (1959) and Plan 9 From Outer Space (1959). I'm sure it's a gift to the audience that Mr. Johnson does not speak for the entire length of the film!

The Beast of Yucca Flats was made for a mere $34,000 and it shows. Perhaps with the right group of friends and a keg of beer this film would be enjoyable. However, I saw it by myself with one glass of wine and that wasn't nearly enough wine to get me through this film. Some say that Beast is so-bad-it's-good. I say it's just plain Bad. With so many other wonderful horror films out there, why torture yourself with this one? 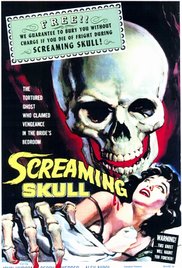 The Screaming Skull is a staple of last night B-grade horror films. Yes, the acting is less than spectacular. Yes, the effects are a bit hokey. However, I would argue that this film is better than most people think it is. Let's start with the soundtrack. Music editor Jerry Roberts and conductor/composer Ernest Gold give us a moody and atmospheric score that is the star of this show. Love it!

Director/Actor Alex Nichol who plays the "that boy's just not right" gardener paces the film fine but his acting is less than spectacular to say the least. The rest of the cast is ok with John Hudson giving the strongest performance of the bunch as Eric. Peggy Weber plays his new bride, Jenni, but too often gives into those 1950's helpless female histrionics that drive me crazy.

The basic storyline is nothing new. A newly married couple moves into the husband's home, which was also the home of his first wife who is now deceased. Strange things tart happening and Jenni starts to think she is losing her mind…or is she? You know where it goes form there! Pretty predictable stuff.

All things considered, The Screaming Skull is hardly a masterpiece but you could do a whole lot worse on a rainy Sunday afternoon! If you like old dark house stories, give this one a try. Oh, and the introduction guarantee of a free burial if this movie kills you is brilliant! William Castle would be grinning from ear to ear!

You can also download a copy of it from Archive.org.

Posted by Zombiefan at 12:45 PM No comments:

Bela Lugosi is Count Dracula. It was the role he was born to play. There are no vampires pining away for whiny teenage girls in this movie. Lugosi's Dracula is far more menacing. His performance is understated and powerful. There are no special effects here. Just an actor who can convey a sense a dread and evil intent through his eyes and hand gestures alone. Lugosi's Hungarian accent also works to his advantage here. What is even more impressive is the fact that he barely spoke English when he made this film and had to memorize the dialogue word for word. Impressive indeed.
There a number of DVD's of this film that are available for purchase. My personal favorite is the 75th Anniversary Edition which is a part of Universal's Legacy Series. It contains a beautifully restored version of the film plus an excellent tribute to the film career of Bela Lugosi entitled "Lugosi: Prince of Darkness." There is also an interesting Spanish version of the film on Disc 2 that was made on the same set right after Lugosi's "Dracula" was filmed. It is entertaining to say the least but doesn't light a candle to the film we know and love.
There have been many incarnations of Dracula that have followed Lugosi's performance but his still stands the test of time. It is one of my all-time favorite films and is required viewing for anyone interested in the horror genre. As far as I know there are no legitimate sites to view this film online for free. [Let me know if you know differently.] Personally, I think it's worth the money to buy the DVD and see this film on the biggest screen you can find.
RATING: Excellent.